CHARLOTTE, NC - DECEMBER 24: Kwon Alexander #58 of the Tampa Bay Buccaneers intercepts a pass to Brenton Bersin #11 of the Carolina Panthers in the third quarter during their game at Bank of America Stadium on December 24, 2017 in Charlotte, North Carolina. (Photo by Grant Halverson/Getty Images)

The 2017 Tampa Bay Buccaneers got a solid season from quarterback, Jameis Winston, but absolutely nothing from their defense. That needs to change.

The quarterback position is so important, a great passer can often carry an otherwise bad team to victory. In 2017, however, the Tampa Bay Buccaneers defense was so atrocious, Jameis Winston’s solid season was completely wasted. In fact, the discrepancy between Winston’s performance and the team’s record was among the largest the league has seen.

During the 52 years of the Super Bowl era, there have been 205 instances of a quarterback averaging at least 7.80 yards per attempt over the course of an entire season. Only 9.3 percent of them resulted in a quarterback record below .500.

On the season, Winston was sixth in the NFL with 269.5 passing yards per game, just a yard behind 11-time Pro Bowler, Drew Brees, of the New Orleans Saints. The quarterbacks ahead of him were a combined 54-25. So how bad could Tampa’s defense have been?

Really bad, as it turns out.

The Bucs gave up more yards than any other team in football and had the fewest sacks, with just 22 all year. They yielded over 400 yards to an opponent nine times; the winless Cleveland Browns did so just once.

This is a franchise that won its only Super Bowl behind one of the best defenses of all-time. 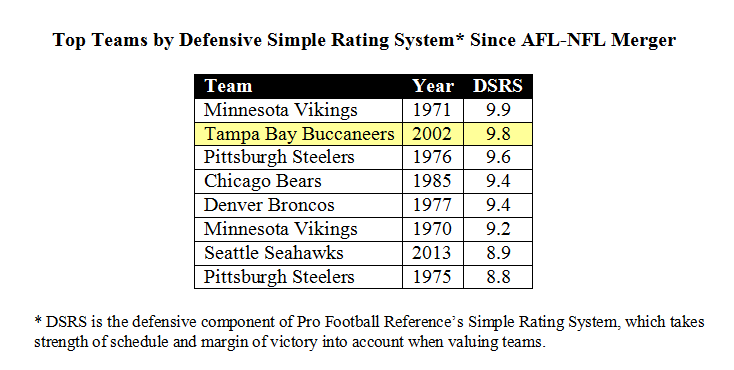 It is unrealistic for Tampa Bay fans to expect their team’s defense to rival that of the 2002 champs. On the bright side, however, the Bucs enter this offseason armed with the seventh overall pick in the draft and the fifth-most cap space in the league. It is imperative that they add some help on D, particularly with the pass rush or in coverage.

Unfortunately, Tampa may be off to a slow start in that department; Brent Grimes, who tied for the team lead with three interceptions – but will be 35 years old when the 2018 season kicks off – is a free agent. Over the next few months, though, if they don’t significantly rebuild their defense, they will risk squandering the prime years of their franchise quarterback.